Chapter One: He Stretches Out The Heavens Like a Tent

. . .In the beginning when he created the heavens and the earth, God invented space, a cosmic description of separation. Our natal home is the Garden of Eden: our current state, exile.  God introduced humanity to the ache of his absence with an angel at our backs.   We were scorched by the heat of the burning sword.  When I was very young and I heard the story of the eviction from Eden, my mother said I would cry and run out of the room. I don’t know why she kept telling the story of the fall to a three-year-old, but as I have grown older I have learned that three-year-olds aren’t ready to hear stories with sad endings, and that the story ends not in Eden, but in the New Jerusalem.  We have all been launched, the exiled and the homeless, on a journey to close the space between: perhaps when I ran out of the room, I was just starting my journey.

It’s a long way home.  But on the way, I’ve had the joy to have been loved.  I have been given much; and as Richard and I used to tell each other, from those to whom much has been given, much will be required.  When I was in Sunday school, I learned to sing, “This little light of mine.  I’m gonna let it shine.”  So I write about my friend to share the light that has been given to me.
. . . While there is a particle of departure even in a loved one’s presence, still an ember of awareness of our loved one glows even in his absence.  We warm to this spark once our friend has left. Frederick Buechner said, “. . . you can summon me back to your mind even though countless years and miles may stand between us. . . after I die, you can still see my face and hear my voice and speak to me in your heart."


I know this is true.


The immediate absence of the beloved teaches us to love an object we cannot see. With the sustained absence of the beloved, we learn that the power of love can be directed and applied to more than one object.  One bright dawn we discover that the love we have been sharing with our absent loved one is, in fact, from God.   Since God himself is love, he is the most perfect object of our love. The cool and dancing reflection of sunlight on the water teaches us something about the bright and eternal light of the Sun.  Although he may begin by longing for an absent parent, companion, friend, lover, child or spouse, the mystic may find in the end that he has tapped into the greater source of love: someday he may learn in turn to shine the love of God to those who cross his path.
. . .But even so, there was clearly something more important to him than the potential for immortality his creative genius promised. One day when we were talking about time, space, mysticism and art, he said something I will always remember.  While he was placing his mysticism squarely in the constraints of time and space, I was so caught up with potential to transcend them both in an immortal work of art that I missed his point. He shot me down with one of his well-aimed arrows: “You don’t need to go so far,” he challenged. “There is a way to transcend space and time, so much simpler than mysticism or art,” he held my gaze and tipped his head to one side. “You only need to love.”
. . .I suppose while Adam and Eve remained deathless, time as we know it could not have existed.   Banishment from Eden resulted in a sundial, or a mechanical clock, or a digital face that ticks in the background, running down the minutes remaining in our lifespan.

Unlike mystics, it seems artists tend to be obsessed with the element of time. They conspire through their efforts to achieve a form of immortality. It’s the same urge that makes people want to be parents taking another form of expression.  All great memorials are works of art meant to defy time: the pyramids of Egypt, Serpent Mound,the Taj Mahal. Built for utility, for beauty, and to last.  Painters, poor as they are, pay more for colors that are made from minerals that will not fade or rust with time.  Bronze sculptures, the most expensive, are so much more durable than wood or ceramic; it is bronze we cast to commemorate those we want never to forget.

Richard was an artist as well as a mystic. His favorite of his own songs was “Elijah.” Like any well-constructed song, it has several meanings. If you read the story of the fiery chariot again, look for Elijah’s death. It’s not there. The outstanding thing about Elijah’s passing is that he never died: his living return is anticipated by four major world religions. I believe Richard asked that his music would speak beyond his death, and I think his prayer was answered. . .
. . .I don’t believe it was a coincidence that while Richard remained creative and prolific throughout his life, he did not have what you might call a successful love relationship.  Troubadours like St. Francis knew that song is the natural response to the soul's longing for love.  In this lifetime, we all have our share of heartbreak; our hearts all echo a chorus of the Song of Songs, and we will go on writing and singing love songs of longing right up until the New Jerusalem descends through the clouds as a bride dressed for her husband.

Yet while we wait for that day, we still have joys to celebrate and creative work to do. Richard believed that our role as creators is the one that most closely reflects our relationship to God. God is creative; he made us in his image, therefore we follow him in our actions. We are invited by design, opportunity and example to imitate God.  And as we create, we allow ourselves to be created as creators, just as the man who grows a crop raises himself up as a farmer. 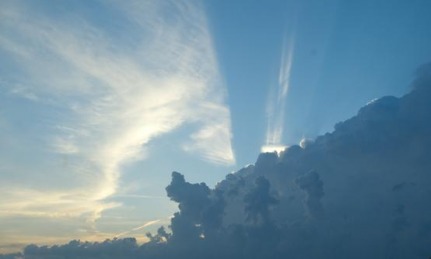