The Life of a Ragamuffin 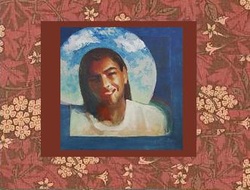 Richard Wayne "Rich" Mullins was born October 21, 1955 at Reid Memorial Hospital in Richmond, Wayne County, Indiana.  His parents were Neva and John A. Mullins, Jr.  He had one younger brother who died in infancy, two older sisters, and two younger brothers.

He was raised in his early years as a Quaker.  His mother was a birthright Quaker.  He attended Arba Friends Meeting with her when he was very young.  When he was in elementary school, his family moved farther into the country and his father relocated the family's worship home to Whitewater Christian Church, which he attended from elementary school through high school.

By his own account, he began to play hymns in four-part harmony before he could talk. He said he
learned by putting his fingers on the keys while his great-grandmother held him on her lap as she played.

In that era, young children were commonly expected to participate in farm chores.  At the age of four, he composed his first song while driving a tractor across the fields.

Richard was held back in the second grade, but he still described himself as the smallest child--in a class full of younger students.

When the Beatles first performed on the Ed Sullivan show, Richard was only eight years old.  The overwhelming effect they had on their audience left a lasting impression on him.

He said he was not good at sports as a child, and described himself as barely able to navigate a basketball field without falling down.  His father noted his musical talent and made sure he had classical piano instruction while in elementary school.   He accompanied a touring youth choir, "New Creations," while still in junior high school.  He was gifted not only with performing, but also composing music, even while he was a teenager.  During his high school years, he began using his songwriting talents,  accompanying and performing with an offshoot touring group, "Children of Light."

Richard was graduated from high school in 1974.  The summer after his graduation, he worked at Hill's Roses in Richmond, Indiana.  He became fascinated with the Franco Zefferelli film, Brother Sun, Sister Moon around the same time.  Mullins became a lifelong admirer of St. Francis of Assisi.

Richard attended Cincinnati Bible College in the fall of 1974.  While a freshman, he began performing at the Jesus House, a local Cincinnati coffee house.  He continued to perform concerts at other coffeehouses and churches across several states.  He started an informal band with students of the Cincinnati Bible College in 1977.  The band was formalized as Zion in the late seventies.  Their self- produced album, Behold the Man, was funded by Richard's uncle, Dick Lewis in 1981.  Amy Grant heard the album, and as a result her production team approached Richard about including a cover of his song, "Sing Your Praise to the Lord" on her upcoming album.

Richard became engaged and moved to Nashville in the early eighties.  He said that he wrote the song, "Damascus Road," when his fiancee ended their engagement.  Richard signed with Brown Bannister Records and the Reunion label in 1983.  His first album with Reunion was released in 1986.

As early as 1984, he began to arrange to have all of his income from his music channeled through a church committee.  The committee made sure he was paid the average American annual salary and followed his instructions, donating from the remainder to the charities he specified.

All of the above information is from conversations I had with Richard during the years we were in close contact, between 1974-1984.  The story of our friendship is recorded in Singing from Silence.

Here is some further information about Richard's life after 1984 that I later collected from sources readily found on the internet:

in 1988 or 89, Richard and his friend, David Strasser (Beaker), formed the Kid Brothers of St. Frank, an association of musicians with a common spiritual  commitment which they described as a "Protestant version" of monasticism.

In the early nineties,  Richard assembled a group of Nashville musicians.  They called themselves the Ragamuffin Band after Brennan Manning's book, The Ragamuffin Gospel.

Altogether, Richard released ten albums before his death in 1997.  One was released posthumously, as were several collections of his work.  He was nominated for ten GMA awards (Dove Awards) during his lifetime, and received one award posthumously.

He kept busy touring throughout his career.  No venue was too large for him, or too small.  He was known for performing barefoot, often wearing unimpressive attire.

Richard began attending Friends University in Wichita, Kansas, beginning in 1991.  He was graduated in 1995.  Afterwards, he moved to Window Rock, New Mexico.  It was his intention to teach music to the children there.  When he was made unwelcome at the evangelical mission because of his broadminded beliefs, Richard turned his attention to the other denomination represented on the reservation, Roman Catholicism.  At the time of his death, he had studied, but not converted to, the Catholic faith.  He stated that his hesitation to make a decision was due to his concern that his audience would interpret his conversion to mean that he thought one faith was better than the other.

He was not, as some have implied, hesitant to convert due to a fear of losing income.   Because of his self-imposed restrictions in favor of gifts to charity, his income would have been constant regardless of whether he lost or gained fans.

Author's Note:  Richard's near-conversion has caused some degree of controversy.  Both Protestants and Catholics make enthusiastic claims that he affirmed their views.  I've seen him claimed by Baptists, Catholics, Church of Christ, Pentecostals, Methodists, Evangelicals, Fundamentalists, Quakers, and so many more I've forgotten them all.  His appeal as a believer was as close to universal as that of any figure of the twentieth century.  It is not necessary to force his beliefs into any strict mold or denomination.  Regardless of whether he belonged to any human institution, by belonging to to God, he belonged to us all.                 --Pam Richards  2013

Richard and his friend, Mitch McVicker, were involved in an automobile accident en route to a benefit concert on September 19, 1997.  Neither he nor his friend were wearing seat belts.  Both were ejected from the Jeep.  A semi swerving to avoid the wreckage struck Mullilns, killing him.
McVicker has since made a slow recovery from serious injuries.

Richard was just a month shy of his 42nd birthday at the time of his death.   He is still sorely missed.